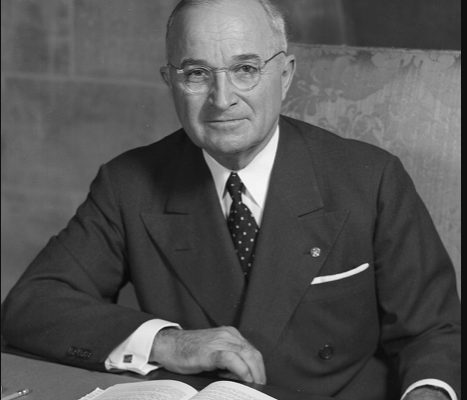 They say history repeats itself. “They”, the ever-present, omniscient but invisible overlords of thought also tell us we study history in order to not repeat the same mistakes. The former is correct, the latter, no-so-much.

The election of 1944 was a watershed in American history as the Democratic President, Franklin Delano Roosevelt was set to run for an unprecedented fourth term in office. Come to think of it, even his third term was unprecedented as no President, including Washington himself, ran for more than two terms. Washington set the standard, and no man was going to best it for doing so would smack of elevating one’s self above the first and possibly greatest President.

Roosevelt, however, was a different breed. Forthright, convincing, full of persuasive passion and a charisma only rivaled by his distant cousin Teddy, Franklin knew he was in the driver’s seat. The nation was winding down a war it was going to win both on the Pacific and European front, and the nation as a whole came to the realization that the United States was going to be the arbiter of peace throughout the world in the decades that followed.

The United States would set the agenda for the Democratic world against Stalin and the Soviet Union with Roosevelt leading that charge. To deny Roosevelt his fourth term would be to deny the United States its leadership right in the post war world. Hence, despite Thomas Dewey, he of the straight arrow, always follow the law mold, Roosevelt would be elected to that fourth term garnering 432 electoral votes to only 99 for Thomas Dewey. A complete wipe out and mandate for Roosevelt’s leadership.

There was something that most of the world didn’t know but Washington insiders and the rumor mill did. This now fourth term President was ill, deathly ill, and would probably not make it through his term, let alone the next year. Great pains were taken to ensure that the general public was kept in the dark to not only ensure Roosevelts return to the Oval Office, but to keep his ill health as secret as possible during a time of war. The problem, however, needed to be addressed. Who would be the Vice-Presidential pick? Some called the position “President in Waiting”, and with that designation, brought into clear focus why the nominee was so important.

Fast forward to 2020. Democratic Presidential Nominee Joe Biden is ill. Anyone that disputes that fact is simply putting blinders on and not willing to accept the reality of the situation. This is not a knock against him, but a plain fact. There’s a reason he’s squirreled away, and frankly speaking, it is solid campaign strategy. The Democratic party did the same thing in 1944, making sure that President Roosevelt did not appear at the Democratic National Convention in Chicago at the grand old Chicago Stadium that July. Rather, he was there a day early to meet with his potential VP sequestered in a heavily armed rail car named Ferdinand Magellan.

So it is with Joe Biden. His cognitive abilities are on the decline, and no amount of excuse making is going to change that. Unlike President Roosevelt, who was much easier to hide in the era before television, cell phones and the twenty-four-hour news cycle, Joe Biden can’t hide. There’s nowhere to go. So, he makes sporadic appearances, all of which to this point have been devoid of questions, and generally tries to be as inconspicuous as possible. Hide in plain sight and keep your mouth closed.

Like I said earlier, this is nothing new, and history is repeating itself. 1944, meet 2020. If we are to take this thread further, then the obvious question comes down to his Vice-Presidential pick. Kamala Harris. If one were to look at her record to date, all of it, not just the cherry-picked parts, can a legitimate non-partisan argument be made that she has what it takes to be President of the United States? Put your partisanship aside, in totality. Can we as a nation live with President Kamala Harris?

On the face of it, no. She was roundly and quite soundly defeated in the Democratic Primaries, dropping out before her own state got to vote on her candidacy, which by all measures, she was going to lose soundly. This would suggest that even her own party didn’t see her remotely qualified to be President.

There is a strong argument to be made that she was chosen based on her race/ethnicity/gender rather than her qualifications, although her career as Attorney General of California and a sitting United States Senator certainly give her requisite qualifications for high political office. This suggests that her qualifications are minimal, but no more than the chosen candidate in 1944.

The fact is that in 1944, the same conditions were afoot, with uncertainty with the Vice-Presidential pick. Roosevelt was in steep decline, and the convention knew that the next Vice-President would more than likely be the President of the United States. The war was not over, but against the backdrop of the ‘44 convention, news of an attempt on Hitler’s life was sweeping the convention hall that very day, as was Hitler’s rather brutal retribution. The next person would have to be prepared to not only finish the war, but possibly confront both Hitler and Hideki Tojo of Japan. The stakes were high in 1944, as one might suggest they are now.

There is no World War II, no fear of Hitlerean retribution, but there is an argument to be made that we are in a battle for the soul of our nation. One, the very Anti-Trump faction made up of liberals, far-left radicals, as well as some Republicans. They see the President as, at the very least, destructive on many fronts. The President also has his supporters not only from the right and the far right, but numbers of defecting democrats as they see it becoming too far left for their liking, with President Trump being the bulwark between radicalism and tradition.

There is also the cultural/ideological fight as well. Free market capitalism vs. a state controlled economy, expansion of federal power vs. the federal system, higher taxes across the board to tax cuts, and every social justice cause one can think of both real and imagined.

With all of these fronts, the question that should be asked by voters is if Kamala Harris is capable of leading as President. Does she have the temperament, the will, the ability to lead? These same questions were asked at the same convention in July of 1944. Three men were in the running, the least likely of which, and by far the least experienced ultimately getting the nod, much to the chagrin of many who packed the Chicago Stadium in the sweltering July heat (with no air conditioning). In the end, Harry Truman proved to be the right choice. This quiet man, who had to be convinced to be Vice-President was thrust into the spotlight and thrown into the flames of world war only a few short months after the election of 1945.

While his presidency was not without controversy (name one that isn’t), Truman today is considered an excellent president, although he left office with a dismal approval rating. Historical reflection will sometimes do that.

Does Kamala Harris have any of this in her? This is not a matter of social justice acceptance, nor a matter of gender, race, or any of the other ways that so many wish to categorize her. This is about the person who will, more than likely, be the next President. One cannot simply vote for her to be “against Trump”. That is irresponsible, reckless, and simply wrong. One must evaluate each candidate on policy and policy alone. Rhetoric, which is only skin deep and cheap only goes so far. It is policy that matters, but for most voters, that is a hole too deep to dig, so they choose what’s on the surface instead.

In Kamala Harris’ case, there are many questions surrounding her as well, just as there were Harry Truman. The fact is that she was selected because she checked certain social justice checkboxes, and anyone that denies that is simply blinded by party loyalty. This does not mean, however, that she’s disqualified. Truman was selected because he was the least controversial among the available candidates, and he was not even close to being the favorite. He came out of nowhere to win the nomination (things were done differently in the forties when choosing a Vice-President). He turned out to be a solid choice. Will Kamala Harrris?

History repeats itself, again. Will we as the voting populace have the will to vet Ms. Harris and vote accordingly? That is the question.

The 10th Amendment: The Forgotten Amendment that Means So Much Today