The Electoral College: History and necessity whether we like it or not…a short article.

So much has been made of the Electoral College this past election. I am willing to bet that most Americans do not even know what the Electoral College is or how it functions. All they know is that the partisans of whichever side lost, in this case the democrats, are calling for its demise. Since the popular vote went to Mrs. Clinton (by about some 200,000), her partisans want the college scrapped (Mr. Trump won 306 Electoral College votes vs. Mrs. Clinton’s 232). On the surface this seems a good idea. Partisans scream that since we are a democracy, it is the popular vote that should matter, not some outdated, eighteenth century concoction that no longer serves a purpose. This short article is going to show why the electoral college is needed. I hope it eases your pain, whichever side of the aisle you are on.
For the sake of length, I am not going to explain how the electoral college works, other than to say that for each representative a state gets in Washington, they also receive one electoral college vote, with the minimum being three (each state gets two senators and one representative). So, in the case of Illinois, our two senators and eighteen representatives give us a total of twenty electoral votes. Make sense? The object for a presidential candidate is to win the state’s popular vote, thereby gaining ALL of the electoral votes of that state (save for Nebraska and Maine whose process is a bit more convoluted) in an effort to gain 270 votes (a majority of 538 total available).
So, that leaves us with the “why the electoral college in the first place” question. This has been debated for a long time, with many in the media and academia calling it “out of touch”, “a relic of the past”, and other such names. Interestingly, Alexander Hamilton (the very one whose namesake play is currently a sensation stated that, “…I venture somewhat further, and hesitate not to affirm that if the manner of it be not perfect, it is at least excellent.”
It should be understood that we are NOT a democracy, but rather a republic (democratic republic for some). That was the intention of the founding fathers. The idea that the popular vote alone would determine, in this case a president, is referred to as a direct democracy…like what was in existence in ancient Greece. The founders felt that a direct democracy would not adequately address the needs of the smaller states and as a result, create a tyranny of the majority in which the larger states would completely dominate the smaller ones at every turn. Something similar happens in Illinois. The vast majority of the counties in Illinois vote republican, but the state always swings democratic. Why? The answer is Chicago which overwhelmingly votes democratic due to Chicago’s size versus the rest of the state. Downstate voters almost never get their voice heard as a result. Something similar could happen to the rest of the nation as well. A few big states or large cities could determine the fate of the entire nation (no matter which side of the political fence you are on). As a result, a rather small percentage of people would determine the governance of this nation, something the founders wanted to avoid.
The founders use historical evidence to prove their point when James Madison elucidated that history has shown when there is no check on the popular, a small band can control the whole, creating unrest and “spectacles of turbulence and contention” which eventually lead to the demise of the whole. This is easily seen to be true when one considers the demise of Athens, the birthplace of direct democracy (when the popular vote is the only consideration). In short, a popular vote only goes a long way toward ensuring a tyranny…something the founders wanted to avoid.
Another consideration was that of having all of the voices of the people heard, not just those of the larger states or cities, but all people of the nation. Let’s take a look at the county map of the just completed election. 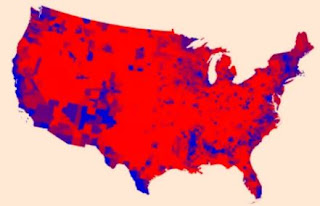 Should one take a look at this map, it is plain to see that the overwhelming majority of counties selected the republican candidate for POTUS, while the more populated areas of the nation voted for the democratic candidate. The mid section of the nation based on population would not have been heard from if there was a straight popular vote, meaning that a few (in comparison) large counties would dictate the direction of the nation in total, without taking into account any other sections…this equals the tyranny that the founders wanted to avoid. It also has to be remembered that in the 19th Century, there were a number of states that did not want to join the nation, so there had to be consideration for giving them a voice in the selection of not only the direction of the country but also in selecting a chief executive…President. Had this consideration not been taken into account, the nation as we know it, and our Constitution, may not have been ratified.
Finally, in an effort to keep this as a short primer, it should be remembered that sparsely populated states, small counties, rural America would be completely left out of the system if a popular vote only were adopted. Candidates would concentrate on where their support is strongest, paying no attention to those in the smaller areas. Large cities would be the only consideration as that is where the votes are, without consideration for the other stakeholders throughout the nation. The founders wanted ALL citizens to have a voice. Consider the makeup of the Congress. Again, small states have a voice in the Senate (two per state), and the House has the large state voice (representation based on population). The Electoral College is an attempt, and a rather brilliant one at that, to give all people a voice in our nation, not just the most populous places. Is that not what we all want? Is that not what we value and stand for?
One last thought. Recounts. It would be almost impossible for a recount nationally to happen in a timely manner, leaving the nation without a chief executive. Recount by state is much easier to accomplish although that is a difficult task as well (recall the Bush/Gore election). It is simply not feasible on a national scale.
There is so much more to discuss on this topic, more history, more analysis. The endgame here is that the Electoral College did its job, and while the supporters of Mrs. Clinton do not like the outcome, the nation has spoken via the system created, and that system does work and does do its job as it was intended all the way back in 1789.

Plan B – A Love Discovery

I have much to learn…thanks for helping clarify.

Happy to help. Thank you for taking the time to read this.

I’ve been searching for George Washington. Not in the conventional way