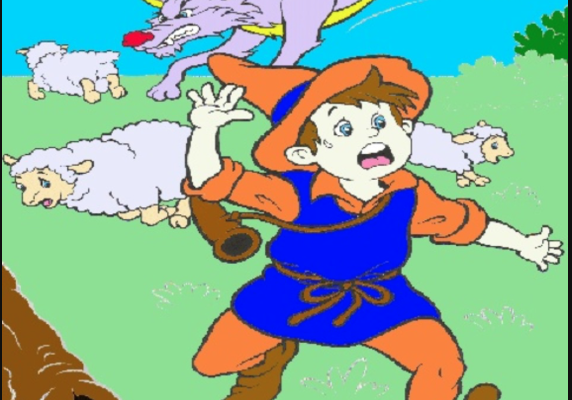 The Boy Who Cried Wolf…Or Did He?

The boy who cried wolf. The implication is that he actually did cry “wolf” and someone heard him. Apparently, there were three people that heard him. There was no proof other than someone who’d heard that three people heard this boy cry wolf. That’s all there was…maybe.

On the other hand, what if it’s only an accusation that he cried wolf? Someone heard him do it. In fact, three other people heard him issue the warning, but none of them have any proof. Not one shred but their word of what happened. Oh, they knew it was him, they said. They’d swear on a stack of bibles, but that might be considered heresy and they might be burned at the stake, so they told someone else they’d heard the boy. In addition, they don’t want to be identified as hearing the boy cry wolf, that would make them stoolies (does anyone use that word any longer), and we all know what happens to them – snitches get stitches – or so the saying goes. So, they told the one person who was willing to approach the town crier. He was always looking for a story anyway, and really didn’t like the little boy to begin with. Besides, the three were promised by that person he’d not reveal it was the three who heard the boy cry wolf. He didn’t want to risk not getting other stories from the three in the future should anything juicy come up.

So, without proof, without the willingness of the three to come forward, and to protect his sources, the person who heard that three locals witnessed the boy cry wolf, told the local town crier. Now, the town crier was known as a mostly honest person, wittingly or unwittingly relating what he believed to be the truth loudly so that all might hear. There was a rumor that the boy and the crier competed for the same position as crier once, and as a result, the town crier, who won the job, held a grudge against the boy, but no one could confirm it. Anyway, the crier screamed the story of the boy as loud as he could while standing in the middle of the town. Since no one knew of their previous conflict, and since there was no reason to doubt the crier, and since the original person who wouldn’t reveal the names of the three people who’d heard the boy cry wolf, most everyone took to for granted that the boy did, indeed, cry wolf, even though the proof was, again, dubious at best.

The boy’s mother and father didn’t know what to think after the story got back to them. They were concerned that the story, erroneous or not, would damage their standing in the community, so they said nothing. Nothing at all. Quietly, they defended the boy to their neighbors, for the community knew the boy well, but the mother and father were wary of saying too much too loud for the wrath of the town was such that they might be found aiding and abetting the boy who may or may not have cried wolf, or so the story goes. They might wind up getting themselves in hot water, or be accused of that other story from the neighboring town…the one in which some little girl stole some porridge or something like that. Implications are implications after all, and since, evidently, evidence wasn’t needed, they didn’t want to take a chance. They thought about punishing the little boy anyway, just in case, but then that would open another pandora’s box about crime and punishment, and they didn’t want that problem added to what was already becoming an issue. The little boy protested his innocence to his parents, but since by this time they were befuddled as to what to do with him, or themselves and their actions, they just stood there, staring at him, and he at them…paralyzed.

Eventually, the entire town got involved. Some protested that there were no facts. To accuse a boy without facts simply isn’t fair, they argued. Others said that facts didn’t matter, there were three witnesses that heard the boy, or so they’d heard. Further, they said, the town crier, while he only reported what he’d heard, was a trusted source for some things before, so why not now? Besides, believe all sources they said.

Eventually, some people showed up from a neighboring town and just to get in on the action, set a few of the village houses aflame, all in the name of protesting – something – anything – there had to be something, right? The truth was in there somewhere, in this little town where three people allegedly heard a little boy cry wolf, and someone heard that there were three people that heard it and reported it to the town crier who relied on his own credibility to get the story out…with no evidence. Yes, this was a fine mess they’d created.

In the end, no one knew the difference between what was right or wrong. None could decide if the boy was innocent or guilty, whether the person who’d heard the story was right, if the town crier related a falsehood or not, or if there even were three people who’d heard the boy that night, or day, or whenever he said it.

All we do know is that the wolf took advantage of the situation and killed as many sheep as he and his pack could kill. They got what they wanted…they sowed division, created a distraction, and were able to eat their fill. What’s funnier is that someone heard a wolf laughing in the distance…but didn’t say anything about it.

Trump – The Atlantic- and What Comes After

The 10th Amendment: The Forgotten Amendment that Means So Much Today