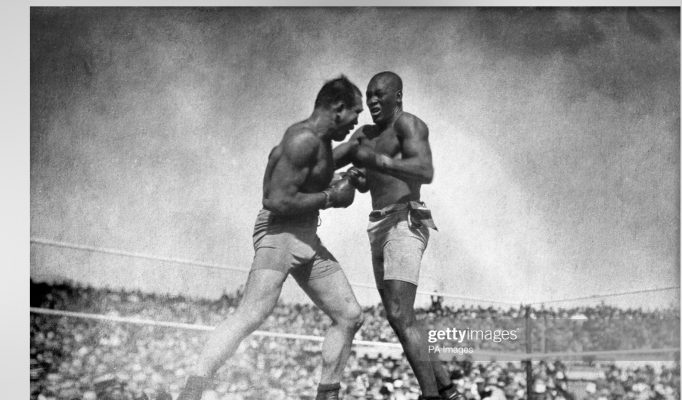 His face was swollen, he was bleeding from a broken nose, and both his eyes were almost shut. This doesn’t even take into account the searing, stabbing pain he felt with each breath he took, breaths that were shallow, not drawing in the critical air his lungs so he could continue.

Even though he ran miles during training, by the fourteenth round, they were logs with feet, and his arms, once powerful and capable of rendering a man unconscious with one mighty swing were little more than meaty appendages hanging by his side while his corner men tried to wring what little energy he had left out of them.

His mind was not as strong as it was five years earlier either, a mind that willed him to victory over the legendary Bob Fitzsimmons, a man with explosive power and supreme skills who was making him look like a rank amateur until he landed a vicious blow that sent the champion to the canvas, unable to continue. These same weapons were helpless versus an opponent of Jack Johnson’s skill, power, and strength. No more could he summon the dynamite that now lie dormant in his arms and hands, his body betraying him and his mind a blank.

Somehow, when the bell rang for the fifteenth round, Jim Jeffries was able to get to his feet. Even he was astonished as were most in attendance, many now cheering his opponent out of awe if nothing else, for the beating he administered to their hope, their Great White Hope. He didn’t want to confront this giant of a man who possessed speed and skill he’d never been party to before, but he had no choice. He knew it, so somehow he got his legs to respond and he stumbled forward, knowing what was to come.

Each punch administered by Johnson was as a large piece of chunked marble smashing into his body and head. He tried to parry Johnson’s attack, but his attempts were little more than childish, with Johnson grabbing his shoulders and holding him off.

“Is that all you got Mr. Jeff?” he heard a smiling Johnson ask loud enough for his corner to hear?

He could feel Johnson smiling at his plight even though he couldn’t see him through the slits that were his eyes, but he knew. Another blow to his chin, an upper cut that came from Florida it seemed, exploded into his chin as a bomb hitting its target. His legs no longer obeyed his mind and he slumped to the canvas, his legs folded under him as though he were sitting for a picnic lunch. His head was ringing so loud he didn’t hear the collective groan of the twenty-two thousand in attendance, he only heard his own heartbeat, and a faint voice in his mind telling him to rise, the flicker of his competitive spirit refusing to die.

As an obedient servant, he did, somehow, only to have the giant begin again, his rock-like fists slamming into his body and head. No longer did Jeffries feel any pain, he was long past that stage now, only feeling the thumping, and with each blow, more life leaving his body. His mind and body were no longer connected, his body only continuing because of its training. Down again, he went, Johnson smiling and calling out his name as he did so.

He was a mouse in the claws of a cat, helpless to defend himself, but helpless to quit. He went through the ropes, and three people scrambled to hoist him back into the ring so he could continue. He stood, somehow, absorbing a series of blows and went back down, this time for good. He failed, and failed miserably against an opponent whose skills and smarts dwarfed his after being out of the ring for five years.

As he lay on the canvas, his mind drifted to the serenity of his alfalfa farm. He saw the golden fields and smelled the pungent, tangy odor as he was dragged to his feet by someone. Blinded and beaten, all Jim Jeffries wanted to do was go home, have a drink and a smoke, and be among his crops as he intended five years ago before the clamoring got to him and he re-entered the ring.

He tried to convince himself during the run up to the event that he was still the same James J. Jeffries he was in 1899 and even 1905 when he retired, but he wasn’t. Where he was once six foot two and two hundred fourteen pounds of cold rolled steel, he’d became by 1909 three hundred pounds of alcohol and tobacco and farming. He was not close to what he once was but when people beat at your door and call you their hope, their champion, it’s hard to resist the call.

As he sat on his stool, he could see the giant smiling, laughing with his cornermen, and accepting congratulations. He could hear Jack Johnson talking about him as though he were a school boy who dared to fight a man, and he realized the great champion was right. He’d let others sway him out of retirement, allowed his ego to trump his analytical mind. He’d succumbed to the very forces that every championship caliber fighter does, believing he can still continue when he knew he couldn’t. He’d allowed the preachers in the pulpits to convince him he was their hope too, and in the end, he’d begun believing he truly was their savior.

Now, sitting, beaten and broken by the man across the ring, he knew he was wrong, they were wrong…they were all wrong and it would cost him for the rest of his life.

As quickly as they elevate you, they’ll forget about you he heard himself say. He knew now his destiny was to be a footnote in the history of a sport he dominated, at one time others calling him the greatest.  Now, that no longer applied in the present, and may not in the future. He knew he and Jack Johnson would be forever tied together and his loss, a loss so one-sided it elevated his opponent at his expense—forever.

As he rose to his feet to leave, a man asked him what he thought of Jack Johnson, the black man who was now, without question, the king of boxing in 1910. He thought for a moment. How do I respond to a question like that? He knew his response would be analyzed, and it would fuel debate. Finally, after a few moments of contemplation he said, ““I could never have whipped Jack Johnson at my best. I couldn’t have reached him in a thousand years.” The reporter looked at him, stunned at the response.  But Jim Jeffries, always the blunt spoken man, looked at the reporter and with no expression on his face, left.

Jim Jeffries was a great champion before the arrival of Jack Johnson, considered by most to be one of the top five heavyweights in any era. The great Muhammad Ali said of Johnson that he was the greatest fighter ever, an endorsement hard to ignore.

For Jeffries, his great career became but a footnote in boxing lore because of the loss described above. It should be noted that boxing at the turn of the century was the sport in the United States, second only to baseball, and just ahead of horse racing in popularity. Truth is, baseball was on the decline until the arrival of a young man by the name of George Herman Ruth in 1914, and by that time, boxing had supplanted baseball for a brief period.

It is during this time that Jim Jeffries strode atop the boxing world as its king before retiring in 1905. During his illustrious career, Jeffries defeated all of the champions of the day, including the great Bob Fitzsimmons whose legendary power and skill was at one time seen as insurmountable, with Jeffries defeating him twice, both by KO. He defeated Jim “Gentleman Jim” Corbett by KO, as well as Gus Rulin also by KO. He was truly a great champion with no less than the legendary Jack Dempsey calling him the greatest of all time.

Further, Jeffries defeated Peter Jackson, one of the great black fighters who was denied an opportunity at the world title due to his skin color. This was a time of forced segregation, Jim Crow Laws and the Supreme Court decision of Plessy versus Ferguson in 1896 that codified the doctrine of separate but equal throughout the United States until the landmark decision of Brown versus Board of Education in 1956 overturned Plessy.

It was also the time that Jack Johnson strode to the boxing stage, relentless in his pursuit of an opportunity to become champion of the world, but denied at every turn due to his skin tone… and unmatched skill. Finally, he chased, cajoled, and taunted then champion Tommy Burns into a showdown in Australia, a fight in which Johnson made Burns into his personal plaything, the cameras recording the fight (later to be played in theaters across the nation) being turned off by the police so they’d not record Burns being pummeled and knocked out by a black man.

Johnson’s prodigious talent for both self promotion and boxing skills set him at odds with much of the public, a public not used to a black man rightly secure in who he was and inclined to let them know. His brashness, willingness to flaunt the rules of society, his romancing white women  (marrying a white woman as well), and general disdain to be put into any category inspired those in the fight game to dethrone him with a White Hope. Johnson crushed, with little effort, all those who attempted to defeat him.

Through it all, the name Jim Jeffries was bandied about. “Johnson could never lick him” they’d say over and over. Finally, the attempt was made to make the fight happen, Johnson relishing the opportunity to vanquish the great hope everyone was talking about. For his part, Jeffries refused each invitation, probably knowing his time was past, plus the fact he’d allowed himself to become grossly overweight, and enjoying his alfalfa farm along with prodigious amounts of alcohol and tobacco (he smoked fifteen packs a day at one time). He was in no shape to confront, let alone defeat, a great fighter like Johnson.

Eventually the calls became too much for him to shunt aside, his ego and his pride getting the best of his common sense, and, well, the rest is history.

As with most things, the public only remember the last thing one does, but in the case of Jim Jeffries, history needs be more kind and recall his great career despite the misguided comeback. He truly was a great champion.

**If you’re interested in a full account of the fight or the fascinating life of Jack Johnson (buried in Chicago), please read the book Unforgivable Blackness by Geoffrey C. Ward. It’s a stunning account of Jack Johnson’s career and life both in and out of the ring. Ken Burns’ documentary based on the book is also quite good, but in my estimation, is unfair in totality to Jim Jeffries and the fight itself, portraying Jeffries as a lout, drunk, and instigator, little of which is true.

Is The Art of Writing Dying?

The Structure of Our Government: Why the Founders Built Our System As It Exists

I’m flabbergasted and flummoxed by a few things regarding the general public’s knowledge of government. Specifically, I’m