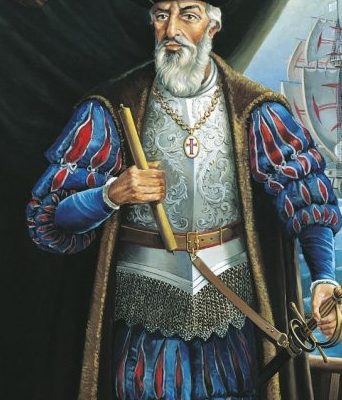 I’m rather bemused by the pundits and politicians who are exercising their supposed moral high ground as they chastise Jeff Bezos and, to a lesser degree, Richard Branson, as they satisfy their need to go to space. Both have used private funding to research, create, and launch what may prove to be a new era in not only space flight but commerce and, yes, even space exploration.

I am given to wonder if the same sentiments were uttered at the voyages of the great explorers of the past, men who were willing to give their very lives in the pursuit of said exploration, broadening man’s understanding of the world, and enlarging their commercial interests at the same time. Without the bravery of these men of exploration, European societies would likely have stagnated, much to the joy of those “moderns” of today who decry the Age of Exploration and see it as a blight upon the history of mankind while enjoying the modern benefits of such exploration.

Vasco Da Gama is possibly the least well known of the ‘biggies’ of exploration which include Christopher Columbus, Ferdinand Magellan, and the great Chinese explorer, Sheng He, who proceeded them all in his extensive exploration of the Indian Ocean and massive fleet of Chinese Junks for no other reason than exploration itself. Sheng He reached the east coast of Africa and then turned around and went back to China, determining that there was nothing of great impact outside of China that made it worthwhile to remain. The sad irony is that his entire magnificent fleet was burned, the new Ming Dynasty rulers not seeing a need to venture past their own borders.

This left the door open for the Europeans, who beginning with Prince Henry the Navigator began to venture forth and explore the Atlantic as well as the west coast of Africa. This was not an easy task as longitude had yet to be invented and early explorers relied upon dead reckoning as their primary means of navigation, along with the astrolabe, an early Greek invention that was passed to the Muslims and then back to the Europeans.

Like Bezos and Branson, the early explorers plied their craft for a number of reasons. Traditionally, historians speak of God, Gold, and Glory as the primary reasons for exploration, and they would be correct, but make no mistake, it was the “Gold” part, either finding it or opening trade routes to acquire more of it that was the primary purpose. European economic systems were based primarily on mercantilism and its accompanying philosophy, bullionism. In short, the idea was to acquire as much gold and silver as possible by means of a favorable balance of trade—selling more than you buy. Since the prevailing theory of economics held that gold and silver were finite materials, the object was to acquire as much of it as possible, thereby allowing the nation with the lion’s share to have greater control over the affairs of others.

All of this led to a few things:

First, an exploration into how to subvert Muslim control of the old Byzantine trade routes via water. The Indian Ocean was the hub of trade, where untold fortunes of spices made their way from the Far East to the tables of the European monarchs. To control such spices and trade would be to have access to enormous wealth and power. Bartolomeo Diaz, he of Portuguese extraction, was the first to find his way to the southern tip of Africa in 1588, his crew forcing his return due to the heavy storms. He was followed 10 years later by Vasco Da Gama, who rounded the Cape of Good Hope and found himself in the middle of the Indian Ocean and the vast trade it provided. It was a boon for Europe, and particularly for Portugal as now the Indian Ocean lay bare, as did the rich spice trade it teemed with. In short order, the Portuguese took control of much of the Indian Ocean and the trade it contained, making Portugal one of the wealthiest nations in the world.

Christopher Columbus took a different tact, preferring to travel west, believing that he would “run into” China by doing so; and he would have been correct had not the continents of North and South America been in his way. The very notion that the world was round was quite common knowledge among the educated of the period, so it seemed reasonable that Columbus’ idea was feasible. Further, Columbus set sail without the benefit of the sight of land to guide him, a most dangerous attempt in the 15th century. Since no one in Europe knew about North America (the fable of Leif Erickson has spotty evidence at best), there was no way for Columbus to know it was there. It was, he discovered it for Europe, and the rest is, well, history.

Without people willing to do what was deemed impossible, future generations would never benefit. Scoff at Bezos and Branson if you will, but remember that untold millions of dollars were spent on Apollo missions, taxpayer money, while the exploits of Bezos and Branson were funded privately. Further, their innovations have paved the way, much like the explorers of the past, for a future we don’t know of yet. We witnessed something spectacular and without parallel in the recent past, and rather than besmirch either because of their vast wealth and what seemed like a jaunt only for the rich, maybe we should take a step back and realize, without the political grandstanding, exactly what this might mean for the future of our planet.

It’s worth a thought.

The Discoverers by Daniel Boorstin

The Wheels of Commerce by Fernand Braudel

A World Lit Only By Fire – by William Manchester.

Academics Do Not Have All The Answers

Not with you on this one my friend. You’re confusing oligarchs with explorers. It’s the things they’re doing with that money that we don’t see that concerns me. Also, many of those early explorers you spoke of were true explorers. These guys are playing explorer and believe me, their actions are not altruistic. Bill Gates buying up massive amounts of farmland. This is because he’s a good guy with pure intentions? I think not.

Gene! Here’s what I’d say in response. Gates is not doing what Branson and Bezos are doing…and despite what Bezos and Branson might be doing elsewhere, it is undeniable that they’ve taken the idea of space and our place in it and elevated it beyond the government – as the government can’t do it…too expensive and the public would not support gov’t funds going toward that anyway. The explorers of the past were true explorers, but money and commerce was first and foremost on their mind, as I’m sure it is with Branson and Bezos. These guys, B&B and opened a new door governments can’t and I think that should not be overlooked. One more thing – exploration of the New World (and others) expanded exponentially because of joint-stock companies – they funded what government couldn’t and they were private entities. Thank you so much for reading!!

Thanks for finally writing about > Bezos, Branson,
and The Importance of Ingenuity – Think 31 < Loved it!

Edward Gibbons, the historian whose masterpiece The History of the Decline and Fall of the Roman Empire, written