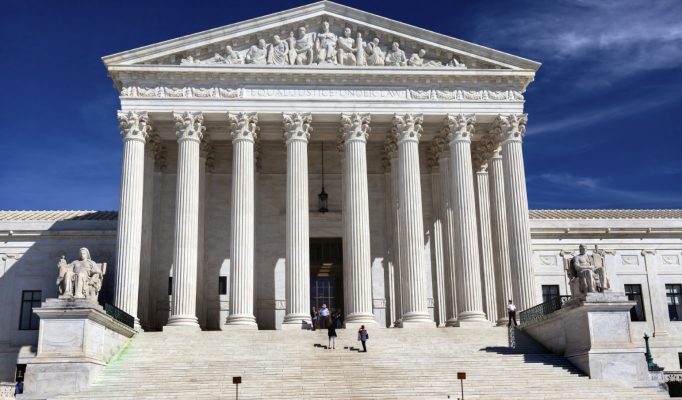 Here’s a quote from Representative Cory Bush: “Getting a black woman in the seat is necessary, but we want to make sure that it’s a Black woman who’s strong on criminal justice reform, has that type of history, strong on worker protections,” the progressive Democrat told the news outlet. “I don’t have a name. I want the person who has those qualifications to rise to the top.”

Here’s the problem: Choosing a Supreme Court nominee on the basis of social justice stances rather than what the justice is supposed to do…adjudicate cases on the basis of whether or not the decision before said justice is constitutional is patently against the purpose of the Supreme Court. Considerations such as social stances, taking a position on workers or anything that is not directly related to the constitution are moot and should not be considered qualifications for anyone nominated to the Supreme Court.

What’s often forgotten, in fact never spoken about, is what the original intent of the Supreme Court was supposed to be. In order to understand the proscribed role, one must first take into consideration the intent of the Founders and their reasoning. Men are untrustworthy. Men are diabolical. Men are, at heart, dastardly and will do what is in their best interests in order to gain power.

Thomas Jefferson said, “In questions of power, let no more be heard of confidence in man but bind him down from mischief by the chains of the constitution.” The entire premise of the United States Constitution and its design is to put roadblocks in the way of the ambitions of people so as to lessen their ability to subvert the system for their own gain. The desires of men were supposed to encounter barriers so as to engender discussion, debate, and allow the cool head of reason to trump the passions of emotion.

The existence of the Supreme Court was to stand not only as the least of the three branches of government, but also to ensure that the other two branches do not subvert the United States Constitution, doing so to manipulate government for their own means. In short, the Supreme Court was to be more than non-partial, it was supposed to ensure the nation’s federal government remain as free from the will and despotism of the people that made up the government as possible.

Hear the words of Alexander Hamilton regarding the Court and presidential involvement: “A single well-directed man, by a single understanding, cannot be distracted and warped by that diversity of views, feelings, and interested, which frequently distract and warp the resolutions of a collective body. There is nothing so apt to agitate the passions of mankind as personal considerations whether they relate to ourselves or to others, who are to be the objects of our choice or preference.”

Hamilton is warning the president should be impartial in his choice and cautioning him that personal considerations such as loyalty to party are bound to cause problems. The choice should not be influenced by “diversity of views, feelings” and all of the other sundry reasons for a nomination, but rather the virtue of the person as well as the president’s “sense of duty”.

The Court was to be impartial, not divided by thoughts of party loyalty; rather it was to be the bastion of unbiased opinion, of a cold reading of the Constitution and the ideas contained therein. The court was intended to be the rational balance against the passions of the Executive and Legislative, the calm amidst the rising sea, and as such, exert a kind of analytical calm, making decisions solely on the basis of constitutionality and nothing else. Sadly, this is not the case.

Since the 1960’s and before, the Court has been besmirched with either one party or the other attempting to fill the Court’s seats with those justices sympathetic to its platform; the thought being proper appointments will further the political agenda of the party in power. This is not and was not, the mandate of the Court. Unfortunately, it has become its albatross.

Historically, the distinct difference between the liberal appointments to the Court and the conservative ones have largely been on the basis of activism versus strict constitutionalism, a considerable bone of contention for partisans on both sides…and one that should not be a consideration at all for either side. Should one have to choose, it is clear the choice must be for strict constitutionalism. Again, hear the words of Hamilton: “[A] limited Constitution…can be preserved in practice no other way than through the medium of courts of justice, whose duty it must be to declare all acts contrary to the manifest tenor of the Constitution void.”

Representative Bush is patently incorrect in her statement regarding what she would like to see in a justice as her wishes are expressly what the Court was supposed to guard against. Partisanship, by either party, should be shunned. Unfortunately, in the rather divisive times we live, that will not be the case; to the contrary, partisanship will be the driving force and for that…we are all losers.