Abysmal wouldn’t be a strong enough word for how the American populace sees the United States Congress. If the Congress were a restaurant, they’d have been closed down a long time ago with no hope of re-opening. The numbers suggest a few questions need to be asked, namely, why are congressional approval ratings so bad, and how did we get into this mess in the first place?

There are innumerable reasons for the above, but I’ll attempt to make it as simple as possible. WE THE PEOPLE are to blame for this congressional mess. There is no need for nuance…we are the problem. In the end, the source of all political power in this nation is the people through the vote, and the people continually vote in incumbents or party over policy and what’s good for the nation as a whole.

This is a poor recipe and one that’s led to a disastrous congress.

There are a few reasons.

First, the notion that “Congress is bad, but ‘my’ representative is good” is pervasive throughout our country. This is one of the reasons incumbents are difficult to defeat. People may not like Congress, but they like their particular congressperson. It’s “your” person who is the problem. This type of loyalty to the person is destructive by its very nature as it lends itself to political blindness, allowing the representative to vote the party line, or fail the accountability test with little to no repercussions for their action or lack thereof. Congressional representatives know this and take advantage of it. On occasion they’ll be tossed, but that doesn’t happen often, unless there is a political upheaval where the nation is experiencing one bad action after another in the form of inflation, disastrous wars, economic meltdowns, or any combination thereof. Then, the populace is looking for an answer and often, incumbents are tossed aside – but again, not usually under the 90% “rule”.

The second reason is one of comfort. Generally speaking, people abhor change either in their own lives and certainly in the political arena. Change brings uncertainty and voters generally run from such action. Therefore, they tend to vote for those names they know, personalities they’ve come to see as “one of us”, or simply wish to avoid the new person who doesn’t have a track record. Voters will even vote for people who are bad actors. Some years ago, Dan Rostenkowski, a Chicago democrat, and the chairman of the House Ways and Means Comittee became embroiled in a scandal that resulted in a prison sentence. When asked in the next election if voters would vote for him again if he could run, the answer was “yes” by a comfortable margin. This is a fine example of voters not being willing to hold representatives accountable and why Congress really doesn’t fear the voter as much as it should.

A third reason is voter apathy. In general, Americans simply don’t come out in great numbers to vote unless it is a presidential election cycle in which the percentage of eligible voters increases significantly (a subject for another article). Here are the voting percentages for the last few non-presidential elections:

These numbers were taken from Ballotpedia and reflect a significant amount of off-year election voter apathy. Americans are big event people, preferring to vote in large numbers for the presidential election, but no as much for off-year candidates. On the local level, the numbers are even worse – exponentially worse. The result? Incumbency in higher numbers.

Finally, party loyalty over policy is a significant driver. This goes back to the loyalty idea mentioned earlier, but has dire ramifications when acted upon. Politicians count on party loyalty and rightfully so as significant numbers of voters will “always vote blue” or “always vote red” no matter what circumstances may abound. In their planning stages, incumbents are quite aware of this phenomenon and take advantage of it. Due to congressional mailings, a perk provided incumbents that challengers don’t have, fund-raising advantages and the ability to approach donors for money as they’re already in power, the advantages are significant for the incumbent in keeping their name in the public eye – allowing for greater name recognition as well as party recognition. Voters, preferring the easy way, vote party out of a misplaced sense of loyalty or simply blindness to said party’s errors. The result? Incumbents who continue to do what they’ve always done with little in the way of repercussion.

Factors such as these can be unlimited and circumstances that lead voters to their choices are as varied as plants in the Amazon Rainforest. There is no “one size fits all” when it comes to voter preferences, however, regardless of the circumstances, continual party line voting along with the willingness to return incumbents to office with little challenge is what drives a “do-nothing” Congress.

One last note: Members of Congress have, on the whole, abrogated their congressional power to the two other bodies of our government; the Presidency, and the Supreme Court, whose influence on our nation FAR outweighs the intent as envisioned by the Founders.

Members of Congress choose to cede their power to the President so as to not be forced to take a stand on certain issues, a stand that might force them into a position which could be used against them on Election Day. Much better to allow the President to stand in front of them and absorb the slings and arrows while they sit back and cherry pick the issues they wish to be visible for, shrinking back into the morass of congressional membership when they’d rather not be noticed. How many times does anyone check the voting record of their candidate anyway?

Only when the American populace realizes that voting policy is much more important than party or politician will we have the chance to right the ship. Until that happens, partisan divides will plague us and yes, lead to this nation embracing the fate of all other republics before it.

Politics is Everywhere; There Is No Escape 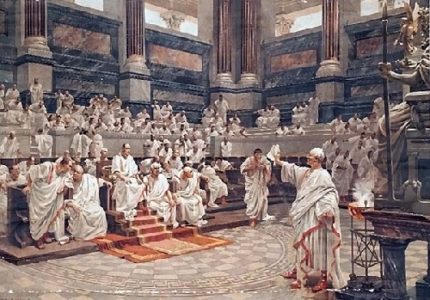 Where are the leaders? Where are the people of vision, independent thought, and bold ideas? I am not talking about the office

State of the Union – When They Show You Who They Are, Believe Them

I watched the State of the Union last night, as I always do. Call it what you will; patriotic duty, curiosity, or simply