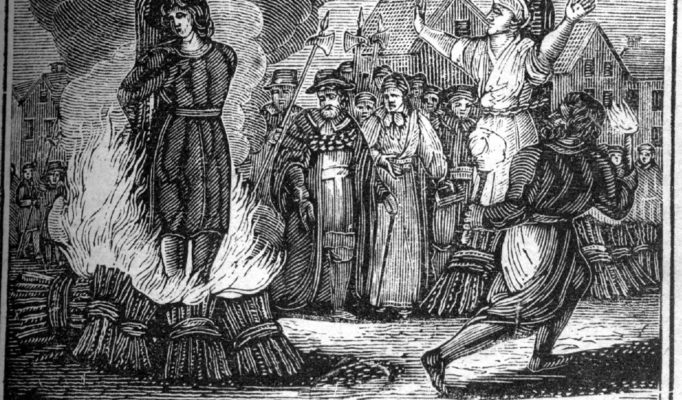 Back in the Dark Ages (Yes, I know that term has changed but I don’t agree with it so I still refer to them as the Dark Ages) the Catholic Church was the dominant power both politically and socially in Europe. The power of the Church was unquestioned, and while certain rulers like Henry IV (Holy Roman Emperor, 1084-1115) had their disagreements (Henry actually apologized to Pope Gregory VII by standing barefoot in the snow while doing so), the church enjoyed almost unquestioned authority both in politics and in the everyday lives of the peasantry, those that made up the vast majority of the European population.

Part of the reason for this unprecedented power was that the peasant had little to look forward to in this life. One’s entire afterlife depended on remaining faithful to the church, and in the good graces of the local church bishops who had the power to determine, by being proxies for the Pope, whether or not you were able to enter heaven upon death. As most European societies were hierarchical in structure, this meant that one remained in one’s station in life for its duration, deferring to one’s “betters” in all matters, and following without question the precepts the Church as determined by the Pope. His was the final authority on matters of faith, doctrine, and scriptural interpretation. To question ecclesiastical dogma would be a major breach of Church etiquette and put at risk one’s prospects of a happy afterlife. Should one be unfortunate enough to become outside the Church’s graces, they would get excommunicated, not allowed to partake in the sacraments of the Church. This meant eternal damnation, so great care was taken to stay within the graces of the Church, especially by the peasantry.

The papacy and its hierarchy exerted iron fisted control on thought and speech. To speak against Church dogma, to question papal authority, or to dare interpret the bible and find papal teachings inaccurate biblically meant punishment in its severest form. Yes, one would be excommunicated, but one could also be branded a heretic. Such branding meant death in most cases by being burnt at the stake. This was true for the wayward peasant, but oftentimes even for those in the upper echelon of Church hierarchy. It was a spectacle, to be attended my men, women, children, and anyone else who resided in the town.

The grand spectacle was done on purpose – to provide an example for everyone else. The stench of burning flesh, the screams of agony as the fire melted the unfortunate individual would no doubt resound in the ears and mind of all who attended. The Church, and the Pope could not be questioned, for to question would be to cause doubt, and doubt shakes the foundation of any ideology. However…

The tighter the grip, the more people began to question. The Church itself went through crisis after crisis internally as well, but never toppled as its foundations, papal power, the unquestioned loyalty of the unschooled peasantry, and the flow of money allowed it to survive intact. Martin Luther questioned those doctrines and stood alone in 1521 to announce “here I stand, I can do no other” as he refused to renounce his writings critical of the papacy, the Church, and church teachings. It was the beginning of a movement that would change Europe forever.

This is quite relevant today as another all-powerful “church” has sprung up. This church is not identified by magnificent structures, nor does it have the power of guaranteeing an afterlife for its followers. What it does have on its side are growing legions of followers. Followers of a doctrine that openly seeks to topple the structures of the United States and replace it with an ideology that has no track record of success, that of Marxism. Further, speaking against that ideology and in favor of the ideals that have made the United States what it is today, will cause one to be branded a heretic and effectively burned at a proverbial stake, rather than an actual one.

To speak against this church will result in being cancelled, losing one’s job, or even an organized boycott of businesses. To embrace our Constitution and its ideals is to solidify one’s heretical position, thereby putting one’s self in the sights of the programmed mob, consumed with the fires of this new church and risk losing all that one’s worked for. The ideology must not be questioned, and the dogma must be accepted, no matter its weakness or historical inaccuracy. The pillars have been driven into the ground and will not be moved.

Questioning the danger of Covid-19 will make one a heretic. Pointing out the Marxist ties of BLM will certainly make you a heretic, as will not conforming to imposed speech regulations, the rules of which change so often that it’s better to remain silent than run afoul of the arbiters of said speech, whomever they are. In that event, you also run afoul of the “church” as a new doctrine, “silence is violence” has been added, a new hurdle to trip over and uncover those heretics among us.

Finally, supporting the President, should one wish to do so, is the most egregious offense, and one that will certainly guarantee your position on the pyre, especially in the world of academia, those that have charged themselves as the arbiters of who and who is not a heretic. They set the standard, control the narrative, and determine the boundaries of what is acceptable and what is not. Should fellow academics disagree, they will find themselves stricken from the record, their classes boycotted, and letters sent to university presidents calling for their dismissal. A purge if ever there was one.

It is the same thing at newspapers such as the NY Times, now fully embracing, without a hint of pushback, the new church. Having purged its editorial board of any moderate voices, the NY Times can now lay claim to being the publicity arm of the church, even going so far as to dox those who fail to comply, another version of stake burning.

Even businesses have been cowed, acquiescing to the outrage mob in order to avoid bad publicity, or active boycotts of their brands. Only Goya brands and Red Bull had the audacity to stand down the woke, and only time will tell if they will remain the lone voices in the woke wilderness.

There was a time when such a church would never be allowed to spring up and control the population as the original Church did in Europe. There was a time when thinking for one’s self was valued in our nation, part of our strength, and one of the reasons so many from all over the world came here. It was more than economic, it was ideological.

There was a time when, despite the differences in appearance, and the obvious checkered history of inclusion in our nation, we still found ourselves united by one bond…that we were Americans and quite proud to be so despite our flaws, scars, and inadequacies. There is no nation on Earth that is spotless, and few that have done as much over the decades to right its wrongs as ours has.

Now, it seems we’ve devolved into ideologically driven armed camps. One side, leftism (to be distinguished from liberals), controlling much of the narrative and acting as the Catholic church once did. Do not believe what they believe, and you will be called a heretic, to be burned at the ideological stake. No amount of factual evidence provided will deter the narrative or message for that is how revolutions become extinguished, and eventually how the Church itself lost its iron grip on Europe as a whole.

In much the same fashion, we are witnessing similar happenings. The very notion of challenging the precepts of BLM or supporting the President of the United States will cast you a heretic only to suffer the consequences of your convictions. See the teacher recently fired for doing little more than saying via a tweet that he’d “had enough. Donald Trump is President of the United States”. A fireable offense, apparently, but where once was protected speech, is now a cause for dismissal.

Suggesting that 1619 was not the beginning of the United States, a claim supported by such luminaries of American historical study as Gordon Wood, and again, one wears the cloak of heresy. To stand for the traditional values of this nation, one built on capitalist principles, free enterprise and the entrepreneurial spirit is enough to brand one a heretic yet again.

To be sure, the shoe was on the other foot in our nation historically. The Red Scare of the 1950’s comes to mind, when all it took was an allegation of communist ties by Joseph McCarthy to have the same heretical claim foisted upon an individual by those on the far right, with many losing their jobs, careers, and famously of all, being blacklisted in Hollywood. However, even that did not have the consequences that we’re seeing now with open riots, iconoclasm, or flaying our national skin in blind devotion to ideology that we see today. Those events of the past did not wish to destroy, as has been said openly, the very foundation of our nation enshrined in the Constitution of the United States. Ideological idiocy to be sure under McCarthy, but not willful murder of a country.

What’s worse is nothing I write here will matter. No amount of historical evidence or eloquence of argument will suffice. Radicals of any stripe refuse to see any matters mentioned here logically or analytically. They are as blinded by their own ideology that commitment the Catholic Church once was. Speech is being silenced as the Church once published the Index of Prohibited Books; rational debate no longer matters. Both sides have their talking points, but only one is militant and organized and actually winning the argument because of tactics and a complicit media rather than strength of position. None of this is good, and history, a history I’ve mentioned many times in previous writings portents the ruination of a nation.