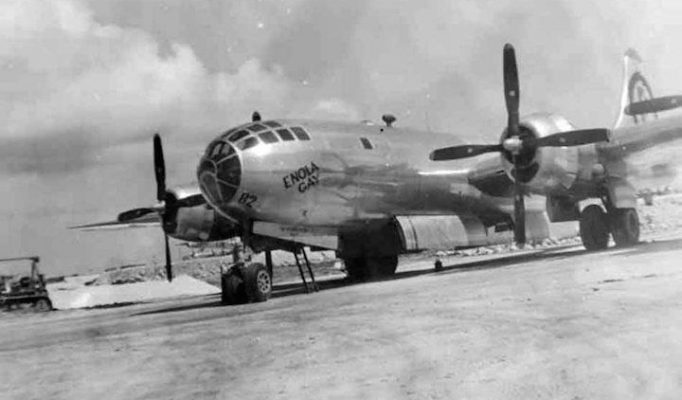 Today, August 6th, is the anniversary of the atomic bomb being dropped on Hiroshima, Japan. Over the decades since this event, there has been a lot of speculation as to the efficacy of President Truman’s order that initiated the atomic age. Criticism has surfaced in the modern age (post World War II) as to whether the bomb should have been dropped at all considering the loss of life and, of course, the devastation to both Hiroshima and the people that lived there.

The loss of civilian life was tragic, with over 100,000 dying, many in the initial blast, while tens of thousand of others perished due to radiation poisoning, one of the after effects of the bomb itself.

One of the traps both historians and non-historians fall into is something called generational chauvinism; the idea that we, in our age, know better than those in the past and therefore we can then pass judgement on those actions, usually in the negative. It’s something that plagues historians, commentators and academics, not to mention the public

The problem is that quite often pundits fail to take into account historical context, the time period, it’s morality and mores, preferring to layer on top of their studies the morality of the day in which the analysis is taking place—the cardinal sin in the study of history, and the mistake pundits, commentators, and academics alike make.

The world during the Second World War was certainly much different before the war than after it, a phenomenon I refer to as the Hitlerian Effect (yes, I will be writing on that in depth in the future). Carpet bombing of civilian targets was not only routine, but an integral part of war planning. Whether it was the Japanese invasion of China in 1932, the bombing of Pearl Harbor, the German blitz over England during the Battle of Britain, or the allies indiscriminate bombing of Nuremberg or Dresden, both needless in determining the outcome of the war, but both as brutal in their effect, all sides were guilty of these events.

Furthermore, when one considers the totality of the western way of war historically, that of complete destruction of the enemy being the norm rather than the exception, one can begin to understand the devastation that was World War II, and also why the West takes great pains to ensure that nothing happens again on that scale.

The Japanese bombing of Pearl Harbor was the catalyst for the retribution of the bomb, of that there is no question. There were events already taking place in Japan prior to the dropping of the bomb that are generally not mentioned in schools; the fire bombing of Tokyo being the prime example. With the backing of the United States government, specifically Roosevelt and Truman, the United States engaged in a campaign to burn to ash Tokyo with relentless firebombs – we’d call it napalm – for weeks leading up to the flight of the Enola Gay. Devastation to the Japanese mainland was quite severe and the loss of life great, but the Japanese continued to wage war as best they could despite warnings to stop and overtures for peace.

For Truman’s part, he knew of the fire bombings, and many in the war department, Henry Stimson himself, thought the war could be won that way, but Truman allowed them to continue despite the ongoing development of the A-bomb, hoping the Japanese leadership would come to its senses, but understanding that they’d probably not.

Harry Truman had a decision to make: Sacrifice the lives of possibly one million American lives (and up to half a million British – a concern to Churchill) to take the island outright, or drop the A-bomb on Hiroshima and with that one action, not only save the lives of those American servicemen but also bring Japan to heel.

Further, there was no guarantee the Russians and Stalin would enter the fray as promised—they’d delayed already by August 5th. The fact is there were many things to consider not the least of which was the ever more fragile alliance between the three powers left: Britain, Russian and the United States.

It was not a decision Truman made lightly as some have intimated. He agonized over it. He knew the destructive power of the weapon, having been informed of the Trinity experiment (the test to see if the weapon would actually work—there was much doubt it would), but he also knew that the Japanese would not accept unconditional surrender as was demanded. Here is a communication from Japanese foreign minister Togo addressing the situation: “If today, when we are still maintaining our strength, the Anglo-Americans were to have regard for Japan’s honor and existence, they could save humanity by bringing the war to an end. If, however, they insist unrelentingly upon unconditional surrender, the Japanese are unanimous in their resolve to wage a thorough going war.”*

That sentence points out another problem President Truman had to face. In his book The Accidental President, David Kaplan points out that should Truman not push for unconditional surrender, it might seem as a slap in the face to those that died at Pearl Harbor. Further, there was concern that it (failure to achieve unconditional surrender) would tarnish the legacy of FDR who was still beloved. Said Eleanor Roosevelt referring to World War I: “We gave up unconditional surrender last time…and now we have sacrificed thousands of lives because we did not do a thorough job.”

One more quotation from Ambassador Togo: “With regard to unconditional surrender…we are unable to consent to it under any circumstances whatever. Even if the war drags on and it becomes clear that it will take much more bloodshed, the whole country as one man will pit itself against the enemy in accordance with the Imperial will so long as the enemy demands unconditional surrender.”

President Truman even considered resigning the presidency. He was exhausted by the Potsdam negotiations with Stalin (they didn’t go well), concerned about the troops he might have to commit, and, of course, the looming decision to authorize the use of the A-bomb, among a host of other things.

Finally, final preparations were made on the morning of August 6th, and the wheels of the Enola Gay were up. The rest is, quite literally, history.

It is quite difficult to remind ourselves of the concept of generational chauvinism for we become enmeshed in our own time, soaked in our own morality and sense of right and wrong. When we fail to keep in mind the concept of historical context, and pass judgement on the past as though we have the moral high ground, it should be remembered that future generations will think the same—and we’ll be the ones in the wrong. History is not about morality but rather the study of events without judgement. Most do not like it that way, but it is the only way, as the great 19th century historian Leopoldo von Ranke pointed out.

History does not lie – those that tell it do.

*Taken from The Accidental President by David Kaplan, page 305.

**Of course there is much more to the story of the Enola Gay, Paul Tibbets and the entirely of World War II. I just attempted to give some insight and clarity to this event as an example of generational chauvinism.

Essay on U.S.: The Coming Dissolution of the American Experiment

His face was swollen, he was bleeding from a broken nose, and both his eyes were almost shut. This doesn’t even take into