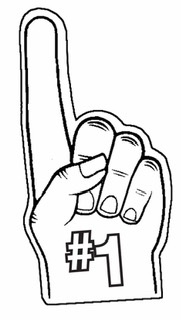 One accuser, one protester, one of just about anything and that’s it, you’re guilty, you have to change, you must comply. Resistance is futile. The almighty ONE of anything has declared that you or your group can no longer do whatever it is you wish because the ONE has decided you’ve impinged upon their right to do what they believe they’re entitled to, decided that what you all are doing is against what THEY believe in and therefore you need to cease and desist right now. Don’t argue, don’t try and defend yourself because the ONE has spoken and the REST must comply. If not, the ONE will sue you until your eyeballs drop out.

Leadership…you too shall succumb to the ONE, for the ONE will make your life so miserable with constant harassment, protests, calls, threats, that you will decide it’s easier to simply give in rather than continue the fight. The ONE is relentless. The ONE is convinced and committed, while the rest of you laugh, talk under your breath, and pontificate about how the ONE is misguided and wrong. Eventually, despite your under the radar complaining, you too shall submit for it’s easier to comply and adjust than it is to tell the ONE to get lost. Do that and you’ll be in the sights of the ONE.
Fascinating that a country which espouses democracy (while our system is not), and prides itself on the vote, will acquiesce so quickly to the ONE that demands to be heard. No jurisprudence, no trials, no debate, but appeasement. There’s a word no one likes much but practices consistently. Appeasement. To give in. Anyone remember Munich?

There is a point to the above rambling, and if you don’t see it, you’re not looking. Yes, being the ONE at times is noble, grand, and worth noting. To stand alone amidst the storm for our principles, to be the lone voice in the wilderness showing the way is more than noble, it’s glorious, admirable, and so often needed. Right Norma Rae?

Now’ we’ve entered the realm where everyone with a singular agenda believes they are the ONE, when in reality, for many of those ONES…their cause is little more than whining as a petulant child until they get their way. Entire industries have been forced to change in order to keep an expensive lawsuit from happening. Entire school districts have given in as many simply don’t have the money in their budgets to fight what is now an almost constant barrage of petty lawsuits brought about by agenda driven parents. Agendas that favor their child only in many instances, not the whole.
We have become a tyranny of the minority, unwilling to tell the loudmouth in the back of the room to shut their pie hole for fear that we’ll be thought of as the unreasonable one, the bully (another overused word), or worse yet…a Republican. Oh, the humanity!!

Let me be quite clear on this. There are times in which bravery in the face of clear wrong needs to be done and those that take up that mantle deserve our admiration and respect. Mary Beth Tinker springs to mind in the landmark court case Tinker vs. Des Moines. But, all too often, the ONE is given more credence and air time than is necessary, and allowed too much control over the whole.

This does not mean to say that the minority or the ONE should never be heard…that is precisely what the founders of this nation wished to avoid, and part of the reason the Constitution exists. The voice of the minority must be heard and considered. There must be, however, common sense applied to the ONE when there is clearly no basis for their complaint other than their own self serving purposes. There is a time to ignore the ONE, to tell them in no uncertain terms to take their seat, as the whole thinks differently. The argument of the ONE does not, no matter their passion, apply here, wherever here might be. Sorry, that’s the way it is.

There was a time when civility rather than being verbose or loud carried the day. Respect for the opinion of others, even, dare I say, listening, were in vogue. Sadly, those days have slipped away, giving credence to the loud, obnoxious and self serving. The squeaky wheel does get the grease, and just about everything else, it seems.

If you’re reading this and simply can’t understand what I’m talking about, well, you might be the ONE.